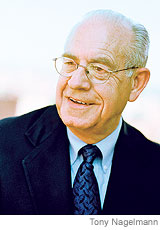 The 1 a.m. brrrrrring from the alarm clock — no problem. “I’ve always loved working in the morning,” he said. “You’re waking up in Washington, D.C. You’re looking out the window and watching this sleeping giant wake up. And I’m right in the middle of it, starting people’s days with things they need to know.”

The duality of his existence seems to please Mr. Kasell mightily — delivering the news and edifying listeners during the early part of the week, having fun with the news and with those same listeners on the weekend.

“Carl is the world’s greatest straight man. Bud Abbott has nothing on him,” said “Wait, Wait” ‘s host, Peter Sagal. “All these years, he’s been this calm, imperturbable voice reporting the news, and it turns out that this warm unflappable voice has a sense of humor. It’s like finding out that Santa Claus is real.”

Mr. Kasell, who goes to Chicago almost every Thursday morning to tape “Wait, Wait” (there are also occasional road shows), now has “premier executive” status at his airline. Of almost equal value is his new-found status as a sex symbol, complete with groupies. Take that, Ira Glass.

“Women — and not just women, young women — swarm him,” observed [Executive Producer Doug] Berman. “There are shrieks in the audience when he’s introduced. Whatever it is, Carl’s got it. Peter is insanely jealous. But,” he admitted, “I haven’t yet seen anyone throw underwear.”

The hottie — one mustn’t be fooled by his spectacles and striped seersucker shirt — takes it all in stride. “I just want to keep going to work,” said Mr. Kasell, who’s about as likely to retire as to fumble a word in his newscast. “I tell Daniel Schorr,” NPR’s 91-year-old political analyst, “that he’s an inspiration to us kids.”