A few weeks ago I was contacted out of the blue by an old UW-Madison professor, James Delahanty. As the academic advisor to my group (and current groups) of Madison students studying in Senegal, he was our stateside pointman for those of us trying to navigate our experience abroad. (I also slept on the floor of his Dakar hotel room in January 2007.)

Jim recommended me to the UW-Madison chapter of Engineers Without Borders, who was looking for someone to come to the upcoming EWB International Conference in Milwaukee to speak about issues relating to technology transfer in Africa.

A few emails later, I’m proud to announce that I will be speaking Friday and Saturday, March 27-28 2009.

“A continent, not a crisis” : How to leverage information technology in Africa effectively.
Cyrus Farivar, Technology Journalist

For decades, and arguably centuries, there has been a concerted effort by countries in the global North to assist countries in the global South, especially sub-Saharan Africa. In recent decades, this has meant computers, and more recently, the Internet. After all, if only more Africans had access to the Internet, then they could cheaply and easily gain the information that they require to better themselves and improve their own situations. But if the Web was invented two decades ago, why is only a tiny percentage of Africa online? What attempts have been engineered to fix this problem? Which have been most successful? To answer these questions, Cyrus Farivar will draw upon his years of experience as a technology reporter and time spent living in Senegal on a UW-Madison study abroad program (2002-2003) to discuss his theories.

I’ll be touching on many projects that I’ve been reporting on for the last few years, including the Digital Solidarity Fund, OLPC, Inveneo, Manobi, M-Pesa, and the upcoming Txteagle.

The title of my talk comes from a blog post by one of my favorite thinkers on all things African and technological, Ethan Zuckerman.

I will also be speaking on the UW-Madison campus on Thursday, March 26. Details TBA.

If any readers are going to be in attendance at the Madison talk or the Milwaukee conference, please let me know!

I’ve been informed that my piece on One Laptop Per Child is/was on Morning Edition today (August 27).

It will also be archived at npr.org and at my site if you miss it.

Dr Aja Nwachukwu, the Education Minister, told newsmen in Abuja that the scheme was discovered to be a “white elephant” project.

“We discovered that the scheme is a conduit pipe to siphon public fund,” he said.
Nwachukwu said the ministry was working on other options to promote the deployment of ICT at all levels of education. 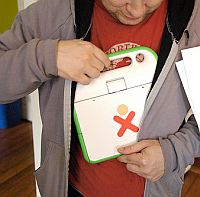 Oh man, my pal Wayan Vota has just found the first documented example of XO laptops getting jacked in Peru.

Please recall NickNeg’s argument as to why XOs would never get stolen:

Hey NickNeg, who’s going to pay for those replacements, eh? I’m back in The Economist!

Computing: The ambitious “$100 laptop” programme is having a few problems, but it may have catalysed a whole new market

IN NOVEMBER 2005, at the World Summit on the Information Society conference in Tunisia, Nicholas Negroponte, a professor at the Massachusetts Institute of Technology, unveiled a small, cute, lime-green computer. The “$100 laptop” caused quite a stir among those interested in economic development. Dr Negroponte and his non-profit venture, One Laptop Per Child (OLPC), hoped that the combination of clever design and the scale efficiencies of manufacturing would make it possible to make the laptops for $100 each. Governments in the developing world, he predicted, would order millions of the laptops and give them to schoolchildren, triggering a revolution in education.
AFP
AFP

A source of inspiration

Sceptics argued that it would make more sense to spend the money on other things—water, sanitation, health care, teacher training—rather than laptops. Large orders from governments failed to materialise. Two-and-a-half years after it was unveiled, the machine, now officially known as the XO Laptop, still costs nearly $200 to make and only about 300,000 of the things have been distributed. And in recent months several senior figures have departed from OLPC, casting doubt over its ambitious goals.

But in one respect the XO Laptop has undoubtedly made an impact: by helping to spawn a new market for low-cost laptops. Hardly any models costing $500 or less were available when the XO burst onto the scene, but now there is a wide selection of such machines, from familiar makers such as HP and Intel, and from relative newcomers such as Asus and Pioneer Computers. By raising the very possibility of a $100 laptop, the XO presented the industry with a challenge. Wayan Vota, founder of OLPCNews.com, an independent website that follows the project, calls the XO a “harbinger of an entirely new class of computers”.

The Classmate PC made by Intel, the world’s biggest chipmaker, is arguably a direct rival to the XO. In July 2007 Intel joined the OLPC project, but pulled out in January 2008. Its departure stemmed from the rivalry between the Classmate and the XO, which take very different approaches to promoting low-cost computers in the developing world. The XO is a radical, clean-sheet design that runs the Linux operating system under a graphical interface called Sugar. The Classmate, by contrast, is a full-fledged but cheap laptop (it costs $300-500) that runs standard Windows software. Intel’s promotional literature, touting the Classmate’s “real PC capabilities” looked like a swipe at the XO.

But Intel had a point. The XO’s Linux-based software is free and can be freely modified by users—something the XO’s backers were keen to encourage. But government and education officials would prefer to stick with the software that has, for better or worse, become the worldwide computing standard. In May Dr Negroponte conceded that the lack of Windows support had hindered the XO’s adoption, and announced plans to produce a new, Windows-based model.

Although the Classmate may have stolen some of the XO’s thunder in the developing world, another low-cost laptop has been a runaway success in the developed world. The tiny Asus Eee PC, little bigger than a paperback book and weighing less than a kilogram, sold more than 300,000 units in 2007 alone. It is now available in several versions: the most basic model, with a seven-inch screen, costs $299, and a new high-end model with a nine-inch screen costs $549. HP, the world’s biggest PC-maker, entered this new market in April with the “Mini-Note”, a small laptop weighing just over a kilogram. It too will cost under $500.

All of these new machines are being aimed at consumers in the rich world, who like the idea of a computer that can be taken anywhere, as well as being sold for educational use in poor countries. The $100 laptop has been a success—just not, so far, in the way its makers intended.

So what happens when good fortune delivers vouchers (and hence computers) into the homes of Romanian youths? Obviously a lot more time logged on to a computer—about seven hours more per week for vouchered versus unvouchered kids. Much of this computer time came at the expense of television-watching: Children in families that received a voucher spent 3.5 fewer hours in front of the tube per week. But computer use also crowded out homework (2.3 hours less per week), reading, and sleep. Less schoolwork translated into lower grades at school—vouchered kids’ GPAs were 0.36 grade points lower than their nonvouchered counterparts—and also lower aspirations for higher education. Vouchered kids were 13 percentage points less likely to report an intention to attend college. And, interestingly, vouchered students who were college-bound were not more likely to express interest in majoring in computer science.

In fact, I quit when Nicholas told me — and not just me — that learning was never part of the mission. The mission was, in his mind, always getting as many laptops as possible out there; to say anything about learning would be presumptuous, and so he doesn’t want OLPC to have a software team, a hardware team, or a deployment team going forward.

The Democratic Party is closer than it’s ever been to a political nightmare—a deadlocked convention. Though the odds of its actually happening are still remote, the idea is so rich with dramatic possibility that we asked Lawrence O’Donnell Jr., former West Wing writer-producer, to play out a scenario in movie-treatment form. The premise is that Barack Obama and Hillary Clinton arrive in Denver, neither having sufficient delegates to gain the nomination nor a decisive majority in the popular vote. And so it’s on…

In 1999, when Nathan Myhrvold left Microsoft and struck out on his own, he set himself an unusual goal. He wanted to see whether the kind of insight that leads to invention could be engineered. He formed a company called Intellectual Ventures. He raised hundreds of millions of dollars. He hired the smartest people he knew. It was not a venture-capital firm. Venture capitalists fund insights—that is, they let the magical process that generates new ideas take its course, and then they jump in. Myhrvold wanted to make insights—to come up with ideas, patent them, and then license them to interested companies.

To his fans, Li is less a language teacher than a testament to the promise of self-transformation. In the two decades since he began teaching, at age nineteen, he has appeared before millions of Chinese adults and children. He routinely teaches in arenas, to classes of ten thousand people or more. Some fans travel for days to see him. The most ardent spring for a “diamond degree” ticket, which includes bonus small-group sessions with Li. The list price for those seats is two hundred and fifty dollars a day—more than a full month’s wages for the average Chinese worker. His students throng him for autographs. On occasion, they send love letters.